This astonishing 18ft drawing of the world’s most famous skyline was created by autistic artist Stephen Wiltshire after he spent just 20 minutes in a helicopter gazing at the panorama.
The unbelievably intricate picture was drawn at Brooklyn’s prestigious Pratt Institute from Stephen’s memory, with details of every building sketched in to scale.
Landmarks including the Empire State Building and the Chrysler Building can be seen towering above smaller buildings after just three days in his spellbinding creation. 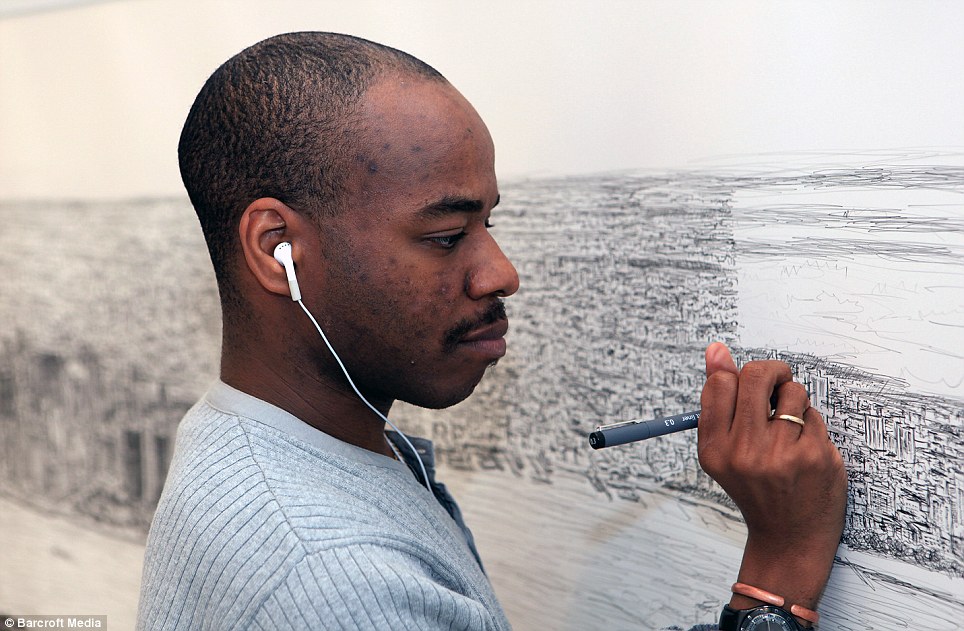 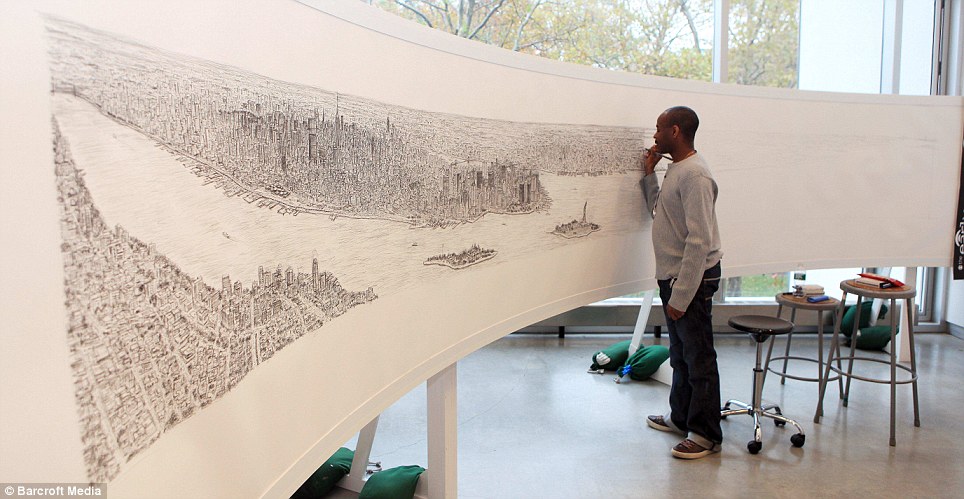 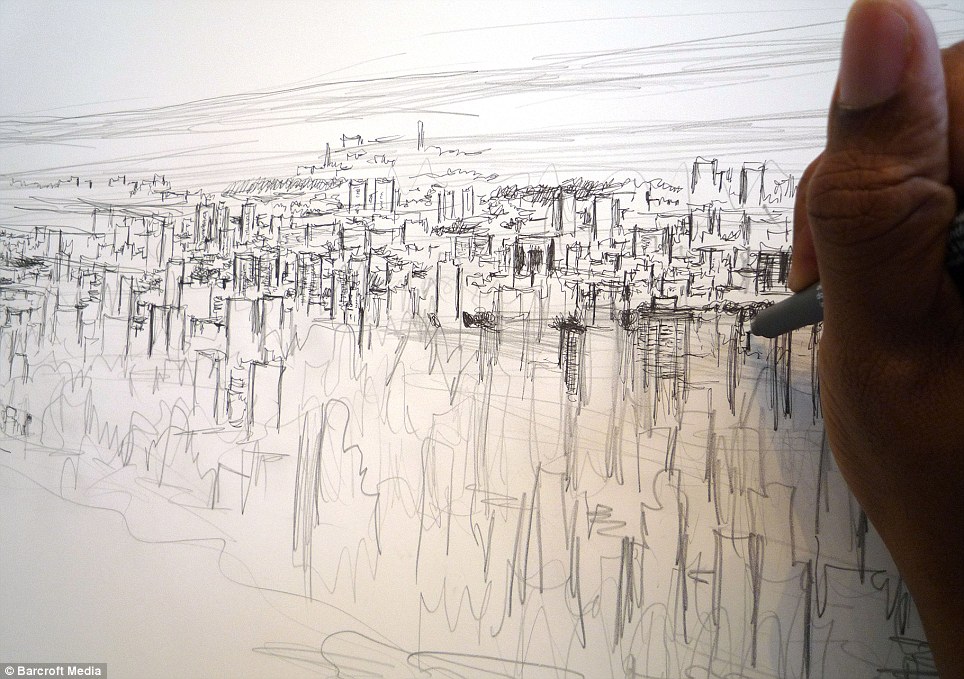 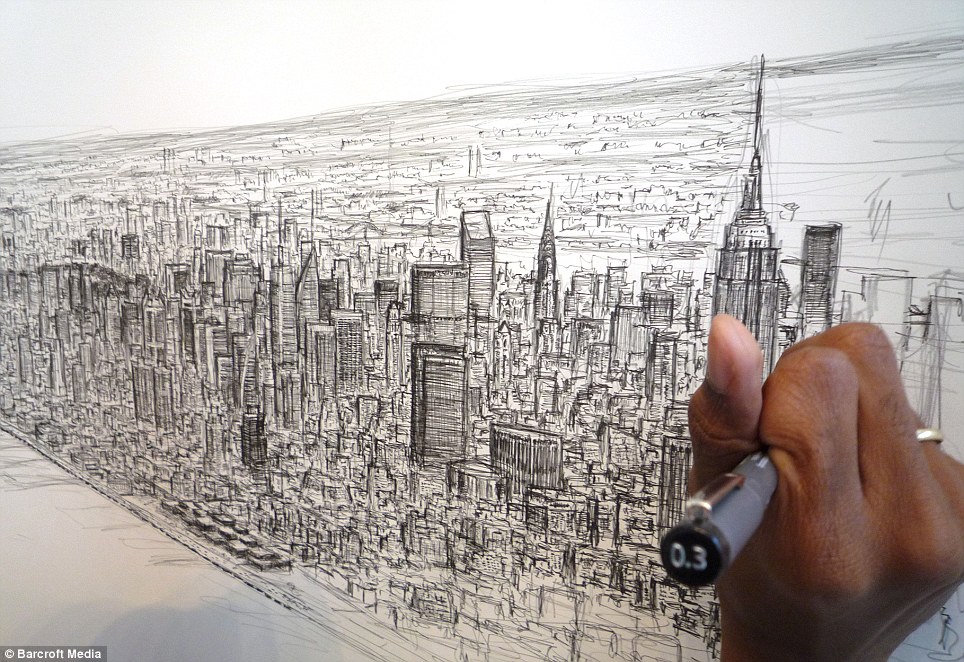 Listening intently to his ipod throughout the artistic process – because music helps him – London-born Stephen uses only graphic pens as he commits his photographic memory to the high-grade paper.

Invited by top U.S. television network CBS to display his talents to the American public in a new screen appearance this week, Stephen has dumbfounded art lovers around the globe with sketches of Tokyo, Rome and Hong Kong.

‘Stephen sketches his layout in pencil first and then scales it within the border, first adding in landmarks before filling out in more intricate detail,’ said Iliana Taliotis, who works with Stephen and his family.
‘He works methodically in short sharp bursts and is even being put on webcam by CBS as he puts his art to paper.’

On his third visit to New York, this is Stephen’s first panorama of the world’s most iconic cityscape.
‘Stephen feels this is his spiritual home,’ said Iliana.
‘There are many similarities between his home, London, and New York that he can relate to.
‘The only difference is that everything is on a bigger scale and with taller, more modern buildings.
‘Cities have always been his passion, and he is drawn to cosmopolitan lifestyles.’

Diagnosed with autistism at an early age, Stephen’s talent for drawing emerged as a way of expressing himself.
Using his drawing’s to help him learn and encouraged by his family, Stephen created a series of 26 coded pictures to help him speak, all of which corresponded to a letter in the alphabet.
Going through up to 12 pens during his sketches which can take a week to finish, Stephen also draws heavily on music which he carries everywhere.
He listens to everything through the 70s, 80s, and 90s, including blues, soul, funk, Motown, pop, Back Street Boys, All Saints and even New Kids on the Block.

‘He always listens to music while he works,’ said Iliana.
‘This work will encompass the five boroughs of New York, New Jersey, Ellis Island and The Statue of Liberty.
‘This one is extra special and unique.
‘Due to his personal love of New York it contains far more detail and the perspective of the panorama is much more in-depth, giving a more realistic, 3-D view of the city.’

In May 2005, Stephen produced his longest ever panoramic memory drawing of Tokyo on a 52-foot canvas within seven days following a short helicopter ride over the city.
Since then he has drawn Rome, Hong Kong, Frankfurt, Madrid, Dubai, Jerusalem and London on giant canvasses.
When Wiltshire took the helicopter ride over Rome, he drew it in such great detail that he drew the exact number of columns in the Pantheon.
In 2006, Stephen Wiltshire was awarded a Member of the Order of the British Empire for services to art. He opened his permanent gallery in the Royal Opera Arcade, Pall Mall, the same year.